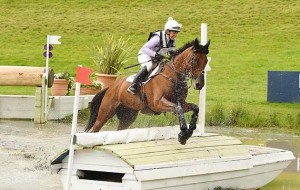 Gemma Tattersall has won the British Open Championship on board Arctic Soul at the Festival of British Eventing at Gatcombe Park. An outstanding cross country display helped secure a first British Championship title, having begun the final phase eleventh overall.

Tattersall and Arctic Soul further confirmed their reputation as one of the world’s fiercest cross country pairings, when they bravely marauded through Captain Mark Phillips’ course to finish just three seconds over the optimum time.

No other rider came close to matching that performance and even as final competitor and post-showjumping leader Marcio Jorge set off, Tattersall remained confident she would not move from the top spot of the podium.

The win continues a brilliant patch of form for the rider as she prepares to head off the European Championships with the British Eventing Team.

Sweden’s Ludwig Svennerstal was second overall on board Balham Mist while Alexander Bragg  was third on Zagreb. Part time farrier Bragg was delighted with his place on the podium.

Australia’s Shane Rose was the winner of the Advanced Championship on board Happy Times. The horse is owned and usually ridden by Rose’s Olympic teammate Sam Griffiths, who is injured and taking time away from the sport at the moment.

Festival Co-Chairman Peter Phillips was pleased with this year’s event, particularly the tireless hard work of the event staff who battled torrid conditions on Saturday to ensure the safety of all concerned.

To catch up on all of the rider reaction from Gatcombe, please click here.