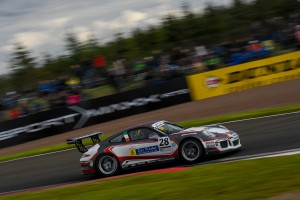 Cammish returned to the series after missing the previous round at Snetterton due to his European Porsche Supercup commitments and looked to regain the ground he had lost in the title battle.

After narrowly qualifying on pole for the first race, the two-time champion recorded a relatively straight forward victory in the first round after leading from start to finish. Dino Zamparelli duelled with Eastwood to finish second with the Irish driver in third.

With Eastwood on pole for the second race, Cammish had more work to do if he wanted to continue to make up the points lost at Snetterton.

A great start saw him immediately pressure the leader, duelling throughout the race before Zamparelli arrived with late pace to threaten the front two. The battled continued before a late clash saw Cammish forced from the track and unable to finish, with Eastwood taking the win.

Two second places and avoiding the controversy of the second race has more than kept Dino Zamparelli in the hunt for a first Carrera Cup championship. Zamparelli hasn’t finished outside the top two places for seven races.

Alex Martin and Justin Sherwood also shared the spoils in their battle for the Pro-Am1 championship. Each finishing second to one another in their respective wins, Sherwood maintained his 3 point lead in the standings.