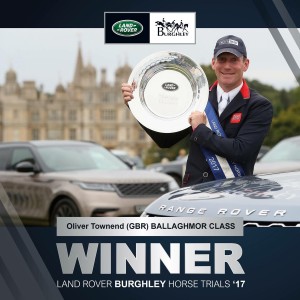 Townend, who had two horses at the competition, performed well in the Dressage before finishing just one second outside the optimum time in the Cross Country.

The Shropshire rider headed into the final phase with a narrow lead over Tattersall and Izzy Taylor but did enough in his round to seal a first title since 2009, the first British winner since William Fox-Pitt in 2011:

Piggy French’s second place completed a remarkable comeback to the sport after an extended period away while having a baby. French had never finished inside the top 10 at Burghley but watched on as she shot up the leaderboard during the showjumping finale, narrowly missing out on a first title:

Gemma Tattersall was delighted with her third place finish after battling illness throughout the event, capping an excellent few weeks that has seen her seal multiple Event Rider Masters titles and an eighth place finish at the European Championships:

After record breaking crowds in the sweltering heat for Saturday’s cross country and dramatic competition from start to finish, Event Director Elizabeth Inman believes that Burghley once again delivered a top class event:

The Lloyd Bell team once again crafted a series of podcasts to capture the magic of Burghley and the exciting competition after each phase, click here to listen or here to download for FREE from iTunes.