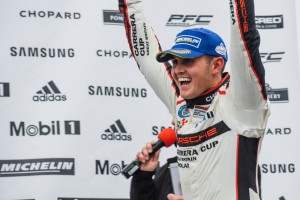 Three driver’s titles and the team championship were all decided in a thrilling finale at Brands Hatch with scholar and 2016 Rookie Champion Charlie Eastwood claiming the Pro driver’s accolade.

Eastwood headed into the weekend with just a four point lead in the standings and second placed Dino Zamparelli had his hopes buoyed after out qualifying his rival in both races.

A breathtaking, tense, tactical battle ensued with Zamparelli looking set to steal the title late on in the final round.  Taking his fate into his own hands, Eastwood overtook his teammate Tom Oliphant with just two laps to go to bring him level with Zamparelli on points, winning the title thanks to a higher number of race wins this season:

An understandably dejected Zamparelli admitted while the manor of his defeat was a bitter pill to swallow, he was immensely proud after his “best year of racing”. The JTR Racing driver only finished outside the podium on three occasions all year:

Outgoing double champion Dan Cammish completed two typically dominant victories in what could be his last Carrera Cup races after a record breaking three years in the series:

Alex Martin carried a three point advantage in the Pro-Am1 class into Brands Hatch but an unfortunate collision in the first round of the weekend eliminated rival Justin Sherwood and gave Martin a first Carrera Cup title:

Consistency was the key for Shamus Jennings as he sealed the Pro-Am2 title ahead of Peter Kyle-Henney by just one point. Kyle-Henney won 10 races throughout the year but a number of DNFs cost him, while Jennings finished every race and was rarely off the podium:

To catch up on all of the driver interviews from Brands Hatch and throughout the whole season, please click the here.