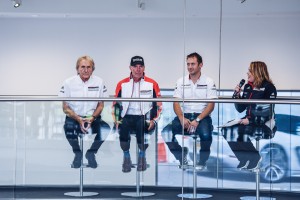 Sam hosting a Q&A session with Derek, Richard and Nick at the Porsche Experience Centre

Richard Attwood (1970), Derek Bell (1982) and Nick Tandy (2015) are the drivers who have been recognised with the special edition vehicles, each with a model reflecting the colour of their Le Mans winning cars and personalised to their specifications with finishing touches such as their racing numbers and signatures.

We caught up with Richard Attwood to discuss is Le Mans memories, that historic 1970 win and being a part of the British Legends Editions:

Derek Bell recorded a number of Le Mans wins, including his 1982 victory, and is proud to consider himself a long term member of the Porsche family:

Nick Tandy continues to race for Porsche in the WEC and expressed his pride at being celebrated in such a way alongside some of his former heroes: