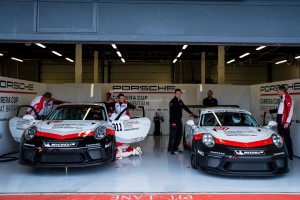 Jamie Caroline is a three-time British karting champion and arrived at Silverstone as British F4 champion, an amazing achievement for the 18 year old after just two years in single-seater cars.

George Gamble, being the oldest finalist at 21, came with experience mainly in sports car racing, most recently completing the 2017 Ginetta GT4 season in third.

Karting and quadbike titles combined with a spell in rallying led 16 year old Daniel Harper to place second in the 2017 Ginetta Junior championship, bringing him to Silverstone as a strong contender.

Converting success in karts into success in sports car, Esmee Hawkey is the only female driver to have made it to the final five. The 19 year old most recently took the Porsche Cayman GT4 Clubsport to multiple victories in the GTA category of the GT Cup.

With high hopes for the future, at just 16 Dean Macdonald is one of the youngest competitors.  In 2017 the Scottish driver moved to British GT4 as a multiple karting champion.