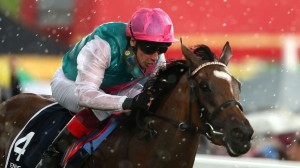 After a stellar year of racing, Enable was crowned Horse of the Year and Champion 3 Year Old Filly at the Cartier Awards ceremony.

The horse, trained by John Gosden, won five Group One races in a row in 2017, including becoming the first British-trained filly to win the Arc, Europe’s most valuable race.

Gosden also saw his other stable star Cracksman win Champion 3 Year Old Colt and paid tribute to the pair after a wonderful year:

Frankie Dettori had the privilege of riding both horses throughout the season and while reflecting on a golden 2017, insists there’s even more to come from Gosden’s super stars:

Recognising an incredible contribution to racing, veteran trainer Sir Michael Stoute was honoured with a special Award of Merit.

The veteran Newmarket trainer, who has been Champion 10 times and saddled a catalogue of top class horses like Shergar, King’s Best,Workforce and Estimate. This was his reaction:

Champion Trainer Aidan O’Brien’s saw three of his stable stars win awards, although none of them were his classic winners.

In his record breaking season of Group One victories, it fell to the two year olds US Navy Flag and Happily to win Best Juvenile Colt and Filly and Order of St George to be crowned Champion Stayer.

The awards were collected by the sons of two of the Coolmore partners for whom O’Brien trains, MV Magnier and Paul Smith: