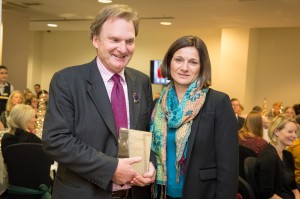 The British Equestrian Federation (BEF) has named our co-founder Rupert Bell as its Journalist of the Year for 2017, in acknowledgement of his contribution to equestrian sports coverage over the past 12 months.

Said Kavanagh; “Rupert is one of the most recognisable voices in equestrianism. Through his entertaining, insightful and educational commentary, he has highlighted the fantastic nuances of some of our individual sporting disciplines and continues to promote British equestrian athletes to a wider audience. ”

The BEF Journalist of the Year award recognises great journalism in equestrian sport, celebrating the work of a written journalist, broadcaster or photographer who has gone above and beyond to promote equestrian sport over the last year. Representatives from the BEF’s member bodies deliberated to decide the winner from a shortlist of six candidates put forward by the 19 members.

A big congratulations to Rupert for being recognised for his outstanding work all year.