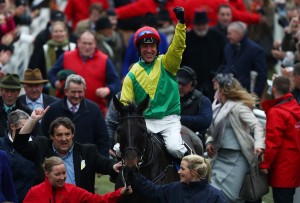 The highlight of the jump racing calendar is over for another year and as always we provided comprehensive coverage for Racing UK.

Catch up on all of the feature racing from Cheltenham Festival 2017 here:

Buveur D’Air won the feature race of Day One at The Festival at Cheltenham 2017, the Stan James Champion Hurdle Challenge Trophy. This is how the race unfolded:

Jockey Noel Fehily was delighted with his victory and pointed out Buveur D’Air could repeat his success next year:

After a slow first 2 days, Day Three saw Willie Mullins’ luck change and he took his 51st win at The Festival as Nichols Canyon raced to victory. This is how Nichols Canyon crossed the line.

Owner Graham Wylie had a second win of the day as Nichols Canyon won the Sun Bets Stayers’ Hurdle Race:

Sizing John fended off stiff competition to win the Cheltenham Festival Gold Cup in 2017 as Robbie Power guided the winner home.  This is how the race unfolded:

Jockey Robbie Power had this to say:

Trainer Jessica Harrington has won the Gold Cup at the first time of asking:

To re-live Cheltenham Radio’s coverage of The Festival then please click here.

To read Mike Vince’s blog on The Festival then please click here.